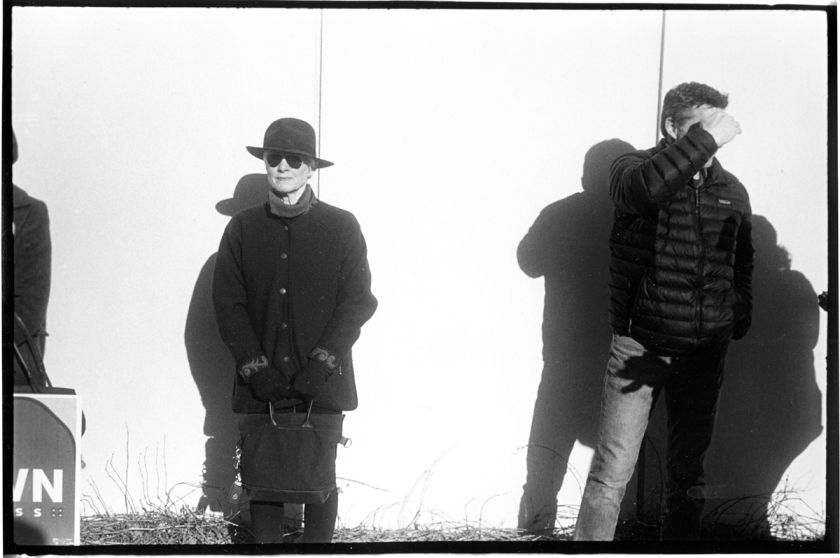 I have a Canon screw mount lens from the early 1950s. It’s a Serenar 50mm f 1.8 in a shiny bright chrome mount. It came on my Canon III. It has a fungus on an internal lens element. My camera tech did not want to disassemble as far as it would have taken to get to the fungus, so we let it go. This is a lens with a very good reputation. It was created fast, sharp and contrasty. It still is.

The coating on the front and rear elements is in nearly perfect shape on the Serenar and I have used it happily from time to time. Still, it has a fungus. The other day Kathy and I went downtown Spokane to photograph the MLK Day march. It was cold, but bright and sunny. I decided to take two cameras, a Minolta SRT 201 with a 135 Rokkor, and my M3, with appropriate adaptor and the Canon Serenar. I wanted to see just what I could get out of the fungus, afflicted lens in bright, contrasty light.

I shot two rolls of film through it, a 24 exposure roll each of TriX and TMAX 100. Most of the exposures were made at f11 or between f8 and f11. The fungus is translucent and it is off center.  The set up area for the march was at the Convention Center with its high and brilliant white block long wall that faced the late morning sun directly. People standing up against or close to the wall threw distinct and sharp shadows behind them and the light made for some very interesting images.   Figure no. 1 is of a lady dressed in black, just a couple a feet away from the wall. I was standing straight on and parallel to her and the white wall. At 1/250th of a second between f8 and 11, the TriX negative is nice and sharp. When I printed the first copy of this I used a 3 ½ filter on Seagull VC fiber paper, and the first print was too light. What did reveal itself in this print was light from the wall behind subtly bleeding around the edges of the lady’s dark clothing and hat. Very subtly. I increased the print exposure by about 50% and got the good print, illustrated here. There is no sign of the flaring, no fog obscuring detail and I think of this as a successful exposure. Obviously the fungus had glowed in the brilliant wall light. My lens hood could not hold that back. Still, the quality of the negative is good and I printed without any burning or dodging. 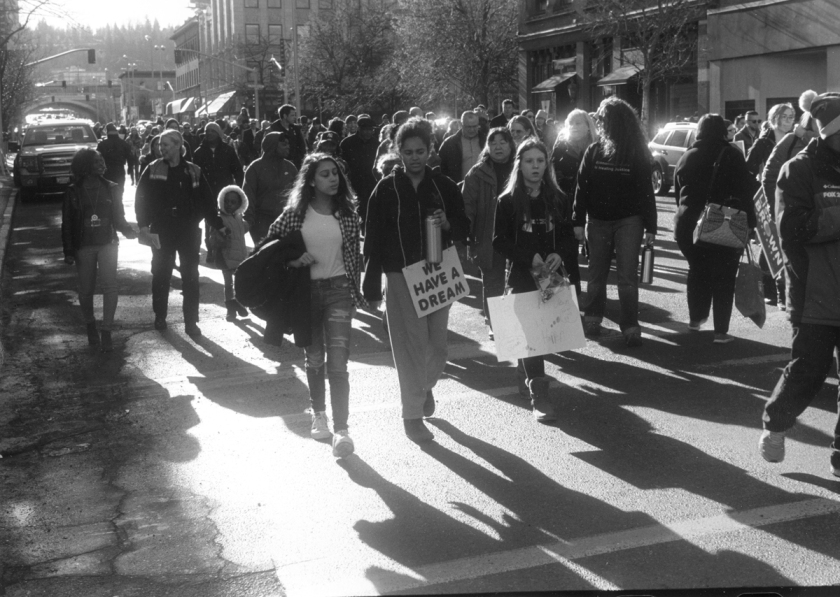 The second image is near the end of the march with a lot of brilliant backlighting. As my custom, I put myself into a shadow area, this time a multi story building whose roof just cut out the noontime Winter sky from the shot. Any light that could flare the fungus in the lens would have to come from the reflections off the street or windows or shiny objects on the marchers. In this case it was hair and pavement and a parked car. Here the effects of the fungus is more pronounced and there are several little bursts of white light on distant marchers where the sunlight backlit hair. The shadows and light on the pavement was very striking in reality and the fungus I think tended to emphasize that in a very pleasant way. If I’d used my Summicron 50mm instead perhaps the backlighting would have been cleaner and more controlled but I am really happy with the fungal glow.

So what is the lesson here? My Dad told me a long time ago, “Don’t throw it away. You could use it someday!” I learned my lesson. A photographer’s equipment does not have to be perfect, nor new. It just has to be used properly, and at the appropriate time. So, make some pictures.