When I was a 35mm shooter only, and when 35mm was the standard for most amateur and hobbyist photographers, the notion of using a medium format camera seemed pretty exotic to me. I could never have afforded a Hasselblad or a Rolleiflex and those cameras seemed to be for professionals and for me out of reach. In fact, I think it would have been much more economical and affordable for me in the 1970s to buy a monorail 4X5 and a lens and some holders.

When I moved to Spokane, Washington from Atlanta, a house fire burned up all my equipment, negatives etc., and a goodwill gesture from my boss landed me his old Rolleicord, my first medium format camera. Shooting square negatives was a big change as was, “shooting from the belly” which I somehow connected to forms of meditation that I had studied in graduate school. That was 25+ years ago and in the last several years I have acquired a nice setup with two Mamiya TLRs, a C-220 and C-330 with 6 interchangeable lenses and a couple alternative viewing hoods. The accumulation of the Mamiya equipment is not because I acquired wealth, it is rather, directly related to the digital revolution in professional photography! I have gotten hold of the discards from professional portrait and wedding photographers who went digital, and for little money.

I started using the Mamiya TLRs at a time when almost all my images were made on either 4X5 or 5X7 sheet film. A friend had given me a Rolleiflex T that was having winding problems and I did some research and settled on the Mamiya as a camera that I could use more loosely, without a tripod, to make more or less spontaneous snapshots when I was in such a mood, the bigger negative then supposedly increasing the image quality. I guess I was thinking of an upgrade from 35mm.

What I found instead was that the TLR worked best on a tripod, was lightweight, with brilliant lenses and good viewfinder, and lent itself to more formality than I had envisioned. It was also quicker, much quicker than the large format cameras and much easier to carry around with me. As Kathy liked the TLR as well, we found a second body and lens and within the first year became very enamored of the possibilities; hence 6 lenses.

I usually characterize the experience as a dramatic increase in productivity, by which I mean the increase in negatives that excited me, were easily printable, and that helped maintain a strong degree of motivation. I padded my interest in making images by every roll off successful negatives. What was especially gratifying in this process was that I also increased my output of sheet film work, developing a couple of series sets that I found very satisfying. Those were particularly suited to large negatives, long bellows draw and a slow and contemplative process of setup and shooting. In other words, the prolific medium format work made the particular characteristics and strengths of the large format equipment much more obvious which then pushed me to develop the aforementioned series work. 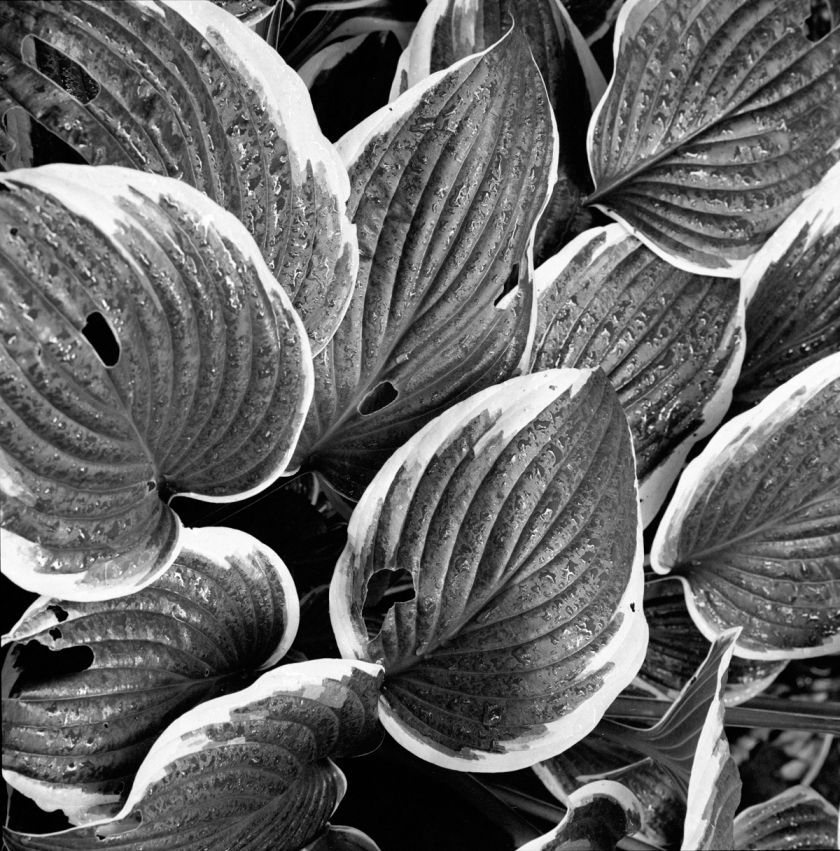 I often print square, with little or no cropping. The square is a nice slice of film and looking down at the ground glass the square is what I see. I know Ansel said that he mentally cropped his Hasselblad images before he pressed the trigger but as he had always preached visualizing the finished image before the exposure he could hardly say anything else! When most of us compose, we quite reasonably use the black 4 walls of our viewfinders or groundglass frame to do so and so I look for a composition that makes good use of the square. Another advantage to printing square is that I can take an expensive piece of printing paper and square it, getting a test strip and a print out of the same rectangular sheet.

Using the TLR on a tripod also means that I can most often use film of 100 ISO or less, increasing the ability to enlarge with little in the way of grain or other “artifacts” of the film negative. It seems strange to think about artifacts with a film negative. Sometimes I really like the feel of grain in an image, but the tripod means that I can use a film like Pan F when I have something else in mind.

As far as image quality goes, I have seen some comparisons done in online blogs “proving” that high end digital cameras produce sharper images than medium format film cameras, but such things are the fodder for self congratulations for those who don’t have the patience to work in a darkroom anymore, and that’s just fine. The notion that one has to have the “best” and sharpest and so on is, in my mind, detrimental to the whole purpose of the game, which is to make significant and satisfying images. And the darkroom is not for everyone, but it is satisfying to see our students, most who have never worked in a photolab before get so excited when one of their prints begins to reveal itself in the developer tray.

In any case, the Mamiyas have proven their ability to produce images of high resolution, great sharpness and fine detail. Even our oldest chrome shutter 80mm lens performs very well.

The histories of photography are usually narratives of “great photographers” who somehow became guiding lights for those that followed them, and to a limited extent there is truth in such stories. My take on the history of photography is a little different, in that I picture the major changes in photography as being technology driven, with the guiding lights as the pioneers of using technological developments to good advantage, (e.g., Stieglitz and the 4X5 Graflex SLR). Each major development in the camera and lens let talented photographers expand the possibilities of the medium. Each new development did not eliminate the utility nor the potentiality of the earlier technologies. Sheet film was not replaced by roll film. This means that because we have such a variety of photo technologies available to us, there is a vast number of approaches to image making. And because so many professionals had to abandon film to meet the market demands, that also means those of us without endless wealth can have access to loads of excellent equipment and the potential images that such equipment represents.

And that is good for us all.

One thought on “Medium Format in the Digital Age”